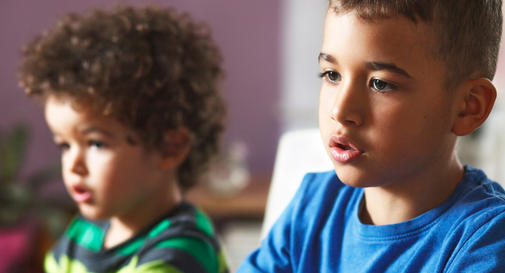 In those innocent years before kids enter school’s social whirl, it’s relatively easy to keep them sheltered in a parent-censored bubble. You might even be able to avoid introducing the term “Happy Meal” into their vocabulary if you so choose.

As far as watching television goes, you basically have complete clicker control: You can make it seem as though PBS is the only thing on. You may decide to show only videos carefully selected from the library. You can get rid of your flat screen and pretend TV doesn’t exist.

But eventually the real world will come knocking. And your newly socialized little person will demand to know what Pokémon, Dora, or even South Park are all about. How can you indulge your child’s natural curiosity but still shield her from harmful (or, at the very least, insubstantial) messages and images?

“It’s about choosing your battles,” says Amy Aidman, research director for the Center for Media Education in Washington, D.C. “Watching a certain amount of television gives kids currency with their peers – it lets them be ‘in the know.’ If you do find a program objectionable, let your children know why you don’t like it, and then exercise your right to say no,” she says.

Here are some pointers to make the most of your kids’ television watching time.

Have your kids watch TV programs, not just TV. This means planning ahead with your child what she wants to watch and turning off the TV when the program is over. “The idea is that you’re making a conscious decision to watch something instead of simply flipping around the channels to find something on. Television should be an engaging activity, not simply mind-numbing time to ‘chill out,'” says Nell Minow, author of The Movie Mom’s Guide to Family Movies and the mother of two teenagers.

Make it inconvenient to watch television. Too much of the time, television becomes a backdrop to family life – it blares away in the den or family room while the kids are playing, mom’s cooking, or the family is eating. “We purposely didn’t put a TV on the first floor of our house so that watching television would require a deliberate decision on everyone’s part to either head to the basement or to the master bedroom,” says Susan Korones Gifford, a New Jersey mother of two kids.

Keeping the TV in a closed armoire also helps tame habitual watching. Hiding the clicker isn’t a bad idea either because it tends to discourage channel surfing. Educators agree that no child should have a television in his bedroom.

Be firm but open-minded. Shows with graphic sexual content or violence should obviously be off-limits for children. But what about the grayer areas – programs you think are simply inane or unpleasant?

“Let your child come to you and explain why she wants to watch it, then work out a reasonable compromise,” says Minow. “It may simply be a matter of satisfying her curiosity about a show or exposing her to just enough so she can ‘talk the talk’ at school.”

If your child does end up liking the program and you don’t find the content objectionable, it’s okay to give some slack. “Certainly, you don’t want your child to be on a steady diet of mindless TV, but banning silly programs altogether may only give the shows a ‘forbidden fruit’ sort of appeal,” says Aidman.